Proper design registration is a ‘Mast’ as demonstrated by Mast-Jägermeister last week when their appeal to the Court of Justice of the European Union (CJEU) regarding shot glass design was rejected.

On 5th July 2018, the CJEU rejected an appeal by the well-known liquor producer Mast-Jägermeister related to a European registered design application directed to shot glasses.

In 2015, Mast-Jägermeister filed a registered design application including figures (not made publically available) that showed shot glasses along with bottles of Jägermeister. The bottles were apparently not intended to form part of the claimed design.

The European Union Intellectual Property Office (EUIPO) Examiner objected to the application on the grounds that the representation of the design was not sufficiently clear, because the presence of the bottles in the design meant that it was not clear whether protection was being sought for the shot glasses or the shot glasses in combination with the bottles.

Mast-Jägermeister could have remedied the deficiencies either by adding “bottles” to the indication of product and dividing the design into separate parts, or by filing new views (which would have caused the application to be re-dated). However, they were apparently unwilling to use either of these remedies (presumably because either action would have made the registered design application somehow not fit for commercial purpose).

Accordingly, the Examiner took the view that the design application could not be accorded a date of filing, since the design for which protection was sought could not be identified.

Mast-Jägermeister’s subsequent appeals to the Board of Appeal of EUIPO, the General Court of the EU, and finally the CJEU focussed on whether the application clearly defining a scope of protection was indeed a requirement for according a data of filing for an application.

However, the CJEU ruled that the concept of representation encompasses, in itself, the idea that the design must be clearly identifiable – so the appeal was rejected, and consequently Mast-Jägermeister’s registered design application could not be given a date of filing.

This case emphasises the vital importance of ensuring that the figures used in registered design applications are correct and cover what is intended to be covered before the application is filed, in particular where any re-dating of an application would be undesirable.

In this case, the originally filed figures in Mast-Jägermeister’s application fatally prejudiced their application, with the resulting deficiencies being incurable despite appealing to the highest possible level.

This article has recently been featured in  The Patent Lawyer Magazine – click the image below to view! 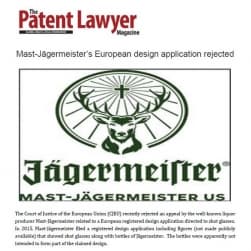 For guidance on preparing figures suitable for use in registered design applications, or indeed questions about design registration in general, please contact a member of our Designs team:

Dani is a Partner and European Design Attorney with extensive experience of filing and prosecuting registered designs in the UK, via EUIPO and internationally. Dani works for a number of large corporations managing their international patent portfolios. His focus is on the fields of internet television, software, electrical and electronic engineering, information technology, microprocessors, semiconductor devices, and communication technologies.

Max has a Masters in Mechanical Engineering from the University of Cambridge. Max works primarily on drafting and prosecuting patent applications in the UK, Europe, and the US and has experience in contentious matters. Alongside his patent work, Max works on preparing, filing and prosecuting Registered Designs in the European Union, as well as in many overseas jurisdictions.