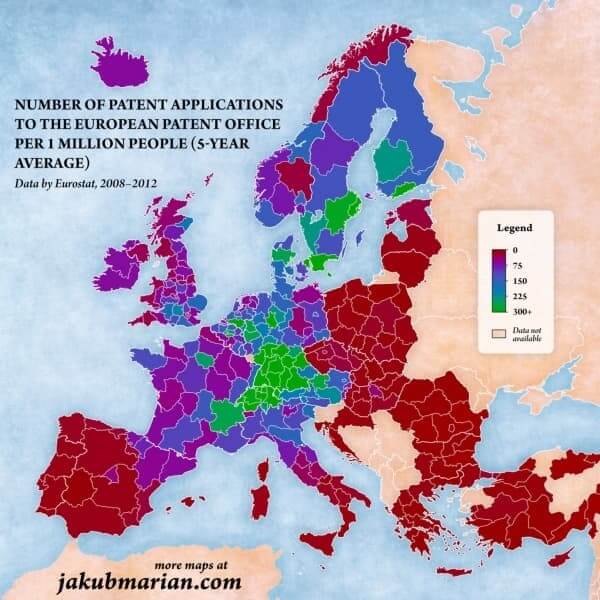 German manufacturing is booming, and German SMEs are filing many more patent applications than their UK counterparts. A new study by the UK Intellectual Property Office (UKIPO) highlights the worrying fact that, not only are the Germans ahead in Europe wide patent protection, foreign companies also own 93% of patents which cover the UK.

Data produced by the EU IP Observatory shows that IP owning companies achieve better economic performance than their non IP owning competitors. Separate data, produced by Eurostat, shows Germany, France, and some Scandinavian countries all far outstrip the UK in patent filing (as shown in the map, above).

We suggest a low cost IP strategy for UK business with an eye on the wider European market.

Why does this matter?

A series of studies over the years since 2013 all show the value of IP. The statistics from the October 2016 update of those studies speak for themselves:

In practical terms, for an individual manufacturing business, IP can allow that business to scale by generating income by licensing out their IP without the need to make large capital outlay on tooling. In addition, the ability to offer cross-licensing deals is often the most cost effective solution to any IP dispute. If a business does not have IP of their own, neither option is available to them.

Typically, companies file patent applications in their key markets, and in the countries where manufacturing facilities are located. It is no surprise therefore that the UK ranks so highly (sixth in the entire world) for the total number of granted patents. However, 93% of those UK patents are owned by foreign companies. UK markets and UK manufacturing capability are clearly of value, and foreign companies are investing heavily in UK patents to ensure their competitive edge in both.

It is startling that UK companies hold such a low number of UK patents. More worrying still is that the prevalence of foreign owned patents in the UK may decrease the freedom UK companies have to innovate, to open up new markets, and to win new investment and new business. UK companies who don’t hold IP may also be at a disadvantage when it comes to cross-licencing.

What can be done?

The UKIPO’s study shows that the UK patent office is high quality, low cost and efficient when compared with its international counterparts. Securing patent protection in the UK need not be as expensive as many people seem to assume. UK patent protection is available cheaply and quickly.

The most significant cost of any patent portfolio is generally the filing of foreign applications. Whilst the European Patent Office (the EPO) is renowned for quality, the fees they charge are higher than the UKIPO and the grant process is slow.

There may be a solution. Another German innovation is the so called “utility model” patent. These are granted without examination, which vastly reduces the cost of registration, and validity is only assessed if the utility model patent is used in legal proceedings. Their term is reduced (they only last ten years) but in fast changing markets, ten years may be enough.

One strategy UK SME’s might use is to obtain a UK patent, and a German utility model. This provides relatively low cost IP coverage in two of Europe’s key markets, and key manufacturing bases. Depending on the market, and the location of competitors manufacturing facilities, coverage in Germany and the UK together may provide a de facto block on the whole of Europe. Significantly, it can do so very much more quickly and at much lower cost than the alternatives.

The map which accompanies this article was produced by Jakub Marian and has been included here with his kind permission.