The CSPC IP Tribunal Handed Down Its First Judgment

The CSPC IP tribunal, in its very first judgment, explored the relationship between interim judgment and temporary injunction when they coexisted in a trial. The CSPC judges also discussed claim construction and gave guidelines on the criteria on assessing functional and “means-plus-function” features in its role as a national appeal court.

Valeo is a French supplier of car wipers and sued Lucas, FuKe and Chen Shaoqiang to the Shanghai IP Court for infringing its Chinese patent ZL200610160549.2 (Wiper connector of motor vehicle and the corresponding connecting device) by manufacturing and selling three models of car wipers. The Shanghai IP Court acknowledged the infringement and issued an interim judgment on 22nd January 2019, ordering Lucas and FuKe to immediately stop infringing Valeo’s patent rights. Then Lucas and FuKe filed an appeal to the new CSPC IP tribunal.

The CSPC IP tribunal accepted the appeal case on 15th February 2019 and held the public hearing on 27th March 2019. The panel of five judges maintained the interim judgment of the Shanghai IP Court and the judgment was pronounced in court. 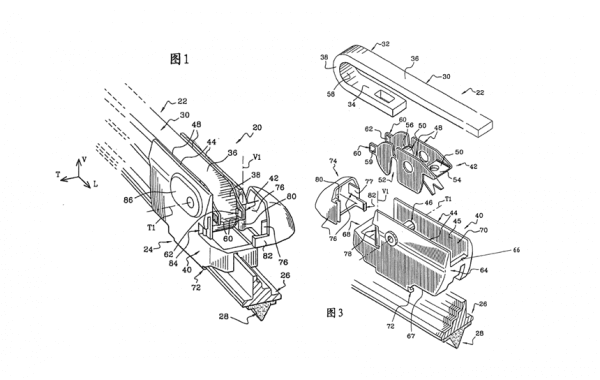 The first core issue discussed in court was whether the alleged infringing products would fall within the scope of claim 1 of Valeo’s patent. In particular, three technical features of claim 1 were analysed by the CSPC judges:

3) Whether feature 3 “in the closed position, the safety fastener (74) extends toward the locking member (60) for preventing elastic deformation of the locking member (60) and locking the connector (42)” was a “”means-plus-function” feature or not. The CSPC judges overruled the Shanghai IP court’s interpretation of feature 3 as a means-plus-function feature and investigated the boundary of identifying a functional feature. According to Articles 8 of CSPC’s Interpretation (II) of Several Issues concerning the Application of Law in the Patent Infringement Dispute Cases, that if a certain technical feature has defined or implied specific structures, components, steps, conditions or the relationships of a technical solution, even if the technical feature also defines its function or effect, in principle it is not a means-plus-function feature.

In the present case, the judges clarified that feature 3 described the position relationship between the safety fastener and the locking member and also implied a special structure – “the safety fastener extends toward the locking member”. Therefore, feature 3 further contributed position and structural limitations (also seen at paragraphs [0056] of the description) and thus is not to be interpreted as a means-plus-function feature, and its positional, structural and functional limitations should all be considered when the features are compared for infringement analysis.

The judges then found that three models of car wipers had equivalent positional/structural/functional features as feature 3, and again feature 3 could also read onto the alleged infringing car wipers.

In conclusion, the three alleged infringing products therefore fell within the scope of claims 1 of Valeo’s patent.

The interim judgment and the temporary injunction

The second core issue was how to deal with the temporary injunction request in the second instance.

In the first instance, Valeo requested a temporary injunction to stop the defendants from continuing alleged infringing activities. However, the appeal was filed shortly after Shanghai IP Court issued the interim judgment, leaving the temporary injunction request undealt with.

1) As mentioned at the beginning of this article, this is the first judgment of the CSPC IP tribunal, which was established to handle appeals decided by Chinese Intermediate People’s courts or IP Courts in invention patent cases as well as other highly technical IP cases. Such a national appeal court will unify the criteria of IP trials, help prevent inconsistency of legal application and improve the quality and efficiency of trials.

2) The CSPC IP tribunal, for the first time, explores the relationship between the interim judgment system and the temporary injunction system, and clarifies the conditions when the two systems coexist.

3) The CSPC IP tribunal closed the whole case within an impressive 50 days, from case acceptance to decision delivery. The speedy second-instance decision enabled Shanghai IP court, which made the interim judgment to simplify a complicated first-instance trial, to continue the rest of the trial in good time.

5) Various different forms of technical support were used during the hearing. For example, Augmented Reality (AR) technology was used to display evidence, speech recognition was used to generate transcripts, and a QR code was provided for downloading the decision.

On 23rd, April 2019, the CSPC IP tribunal’s held a public hearing of the first administrative case: appellant Baidu, Inc., Sogou, Inc. and the appellee State Intellectual Property Office Patent Re-examination Board. Due to the complexity of the case, the court did not pronounce a judgment in court. However, we will continue to watch this case and future decisions made by the CSPC IP tribunal.

Court approves service of legal proceedings via NFT
Patents for plastic recycling hit record high, up eight-fold to 2,149 in the past five years
EU community design protection of ‘modular’ products – ‘The LEGO Exemption’