Is the Paradigm for Detecting Infectious Agents About to Change?

Patents provide an alternative and interesting source of information for identifying emerging technology trends. One such recently observed trend supports a growing interest in the use of indirect biomarkers in diagnostic assays. This article describes the key differences between direct and indirect biomarkers, and illustrates two examples to show how indirect biomarkers are providing new clinical diagnostic opportunities, namely to improve initial triaging of patients in accident and emergency scenarios and to allow rapid and accurate screening of patients carrying a latent tuberculosis infection.

Classical diagnosis of disease-causing agents relies on identification (i.e. direct detection) of a key biomarker that is characteristic of said agent. Examples of such biomarkers include: nucleic acids (detection via polymerase chain reaction hybridisation, sequencing, isothermal amplification); antibodies (detection via ELISA, immunofluorescence (IF)); antigens/ proteins (detection via ELISA, IF); and agent isolation (detection via differential cell culture means). This, in turn, requires knowledge of the infectious agent in question (table 1), and goes together with constant refinement pressures to ensure all newly-emerging variants are also captured. The high specificity typically demonstrated by such biomarkers, however, unfortunately presents an Achilles’ heel when a negative diagnostic outcome is reached such that further intelligence (other than subtractive analysis of the targeted agent per se) can be gleaned.

It should also be noted that the different biomarker types demonstrate their own strengths and weaknesses when assessed in terms of, for example, minimum diagnosis time requirements, transportability, relevant detection window timeframe, and sensitivity (table 2).

By way of example, the following Ebola case study (figure 1) nicely illustrates the potential criticality of detection window factors that impact both polymerase chain reaction and antibody detection. In more detail, premature use of polymerase chain reaction detection during either the ‘incubation’ or early ‘pre-haemorrhagic’ phases will likely result in a false negative. Similarly, premature use of a diagnostic for IgM up to and including the mid ‘pre-haemorrhagic’ phase would also likely yield a false negative. 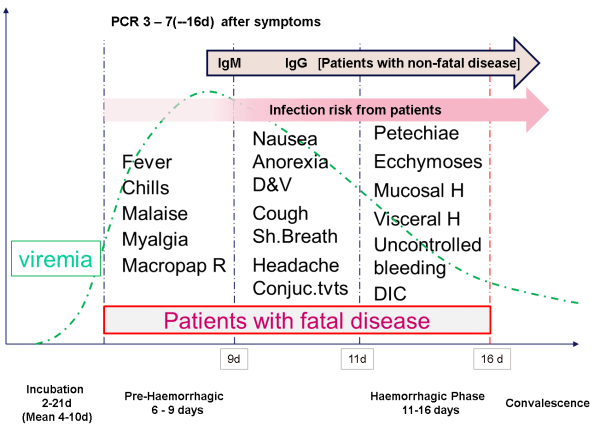 While significant advances have been made with classical biomarker diagnostics, there remains a variety of notable unmet clinical needs:

Is now the time for an alternative (potentially supplementary) approach?

Recent developments with the use of indirect biomarkers (e.g. differential gene expression or metabolism profiles) have attracted significant interest. The use of carefully selected biomarker sets in combination with robust algorithms provide important assay flexibility and allow specificity and/or sensitivity levels to be dialled-up or down as appropriate to achieve an optimal read-out. Moreover, this flexibility provides the means for further interrogation of a clinical scenario where initial diagnosis has failed to identify a positive outcome, and thereby addressing one of the major weaknesses associated with classical biomarkers weaknesses.

By way of example, WO2018/060739 teaches use of a variety of different marker sets can be employed to distinguish between septic inflammatory response syndrome (SIRS) and sepsis, and subsequently to differentiate between important subsets thereof. In more detail, a simple triage diagnostic of this type would find immediate value, for example when assessing a patient who has presented in any emergency scenario. Rapid point of care confirmation that the patient has SIRS would negate the need to administer antibiotics, and potentially represents a huge step forward in improving current antibiotic husbandry.

Similarly, for a patient presenting with sepsis, being able to differentiate between abdominal sepsis and pulmonary sepsis would permit a more informed decision to be made with regard to the type of antibiotic administered (e.g. to target gram positive, or gram negative bacteria). Another interesting biomarker set described allows one to monitor patient recovery and hence to determine more accurately the correct time point for appropriate patient discharge from hospital. This would, of course, help to address current bed capacity problems without compromising patient safety.

By way of further example, WO 2015/170108 teaches use of a variety of biomarker sets for identifying M tuberculosis infection. This infectious cycle of this agent includes an intracellular ‘latency’ phase during which bacilli do not circulate freely within the body, and are therefore particularly difficult to detect. A further setback with the use of classical biomarkers for detecting M tuberculosis is skin testing may be compromised by BCG vaccination and by exposure to environmental mycobacteria. The presence of a large reservoir of asymptomatic individuals latently-infected with mycobacteria presents a major problem for global control of M tuberculosis infections. This is indeed a key priority for many health and immigration authorities, particularly at the ‘point of entry’ for developed countries where the majority of TB cases are imported. The indirect biomarker sets described achieve both accurate and timely diagnosis of early-stage infection where conventional biomarker detection (via cell culture or PCR) is not possible. Possibly of most significant interest, the authors describe use of unique marker sets that provide robust diagnosis of latent M tuberculosis at sensitivity and specificity levels far superior than have been hitherto reported.

These two brief case studies illustrate the huge opportunities indirect biomarkers present for rapid bio-sensing technologies for both the control and prevention of infectious diseases, and related heath- or life-threatening management scenarios.

We urgently need to start moving away from sole reliance on classical biomarkers (noting in particular the impotence of these markers in negative diagnostic output scenarios) and start embracing the new world of indirect biomarkers to detect and characterise important host signature profiles.

This article was first published in the April 2019 edition of Intellectual Property Magazine.