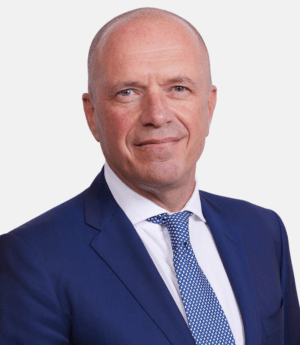 Gerold is a German patent attorney and a European patent, trade mark & design attorney. He works in the areas of life sciences and organic and polymer chemistry including personal care items and compositions, beauty, polymer chemistry, polymer applications and additives, as well as oils and fats.

Gerold has a strong background in all aspects of inorganic and organic chemistry, polymer chemistry, metallurgy, life sciences and pharmaceuticals, with particular expertise in polymer mechanics and, natural oil and fat chemistry. With experience of over two decades, both as an in-house attorney and in private practice, Gerold has developed a deep understanding of the needs and expectations of large industrial clients, as well as a broad knowledge in respect of the support smaller clients without their own developed IP infrastructure should expect. Gerold has extensive experience in handling large IP portfolios, and efficiently prosecuting patent families before the German and European Patent Offices (EPO), as well as on an international level, working seamlessly with foreign associates. He has an outstanding success rate in handling oppositions before the EPO, which has helped him become a sought-after individual for defending clients’ patents as well as securing freedom-to-operate by having competitors’ patents revoked or limited. Before the German Patent and Trademark Office and the Federal Patent Court, Gerold has successfully taken part in numerous proceedings regarding the validity of patents as well as the validity of utility models.

Gerold works in all fields of patent and trade mark law, with a focus on prosecution of patent applications, oppositions, appeals and litigation. He predominantly works in the technical fields of organic and polymer chemistry including personal care items and compositions, beauty and polymer applications and additives as well as oils and fats, and other life sciences areas such as immunology. He is also specialised in legal opinions and has for many years held a series of lectures on that topic.

Gerold studied chemistry at the Johannes-Gutenberg-University in Mainz and at the University of Massachusetts in Amherst, with a focus on polymer chemistry. He graduated with a diploma in chemistry and received his PhD from the Max-Planck-Institute for Polymer Research in Mainz. He began his career in the field of intellectual property in the patent department of Henkel KGaA in Duesseldorf.